Aren’t we practicing the concept of minimum viable product for decades? Yes, this is what came in to my mind when I heard about MVP. If we observe the surroundings we can see the implementation of MVP. I would say MVP as a product with a minimum number of required features at a given point of time.

Just take the example of a cake seller. Once he got an offer to prepare a special wedding cake which was not his specialization. If he is able to successfully deliver this order he will get more orders. As it was agreed that he is going to get the payment once the cake is delivered he wants to go with the fail earlier approach. In this approach he will lose less money if he fails in preparing the cake which the customer wants.

After preparing the base of the cake he called his friends to taste it. Note that he called his friends after finishing a core of the product which is edible. Once he got the positive feedback he sends few pieces of the cake to the customer to get their feedback. He repeated this process after adding each layers and decorations. On the wedding day he presented the fully finished cake to the customer. As he was getting the feedback from the customer at each stage he was able to prepare the cake the way his customers wanted. This is the process of agile MVP. 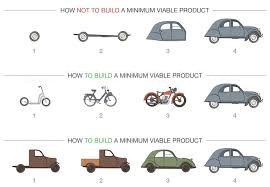 In this picture both 2nd and 3rd can be considered as examples of minimum viable product. To describe the 2nd one take the example of a vehicle dealer who opened a shop in a village at the hill side. Normally the villagers had to walk long distances to reach different destinations. The shop dealer found this as an opportunity to introduce roller-scooter to the villagers. Most of the young villagers bought this as they found it useful to travel with little effort. After few months of using it they gave their feedback to the seller about their problem with the roller-scooter. Main disadvantage was they were not able to stop it as soon as they encounter an obstacle. Then the seller introduced the bicycle which had a braking system.

Now it is left up to your imagination how the next products were introduced. In this scenario the product is a transport medium. Instead of thinking the car as an end product think like there was no product at all and the seller gradually adds new forms of the vehicle based on customer needs.

In the 3rd picture, customer has requirement of a four wheeler. In this case first delivery is with core components of a car and then in each iteration/mvp release new components are added on top of the existing core product.

In both cases delivery in each iteration is a usable product which is the ultimate goal of MVP. Build and deliver a product with minimum investment, minimum infrastructure and with minimum/core features. Add more features or change the product based on the customer requirements.

Consider building a credit scoring engine which takes the customer data as the input and calculate the score and gives list of high risk prospects/customers to the business team. In this case the business team wants a system which gives them the result in a readable form and there is no demand for a User Interface.

So if you are considering MVP approach then the initial MVP should not focus on fancy UI or putting too much on infrastructure. Here the effort should be to build a concrete credit score calculation engine which is the core of the future product. The next thing to build is a program to feed the data to scoring engine and a script/program to generate the report to the business team. Once these 3 components are ready then it can be considered as the first MVP.

As the quote of David J Bland, Producer decides what is minimum but the customer determines if it is viable. Of course the time factor contributes to the viability of a product. If this article is too verbose in conveying the idea of MVP then it is not an MVP article. If this is not at all conveying the idea of MVP then also it is not considered as MVP.